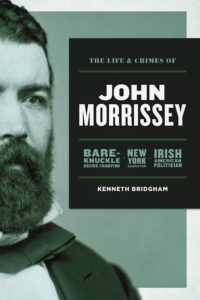 In 1855, New York City was scandalized by one of the most infamous murders in its history, that of gang leader Bill “the Butcher” Poole, the feared knife-fighter who later would inspire Daniel Day-Lewis’s character in Martin Scorsese’s film The Gangs of New York. The acknowledged mastermind in the Butcher’s undoing was John Morrissey, a two-fisted Irish immigrant who, more than any other man of the age, represented the nefarious links between organized crime, politics, sports, and high finance in America. The loose inspiration behind Leonardo DiCaprio’s character in The Gangs of New York, he was an undefeated bareknuckle prize-fighter, widely recognized as the national champion, as well as a feared gangster and mob boss before either term was coined, rumored leader of the Dead Rabbits street gang, and eventually U.S. Congressman and member of the New York state senate. He became the millionaire operator of some of the world’s most opulent gambling halls, and was the founder of the Saratoga thoroughbred racecourse. Equally comfortable hobnobbing with pimps, cut-throats, and thieves as he was with Presidents Lincoln, Johnson, and Grant, or railroad tycoons like Cornelius Vanderbilt, the once impoverished street kid rose to a level of wealth and power unprecedented for Irish Americans to that point in the nation’s history.

The culmination of eight years of research, The Life and Crimes of John Morrissey is the most in-depth biography ever published about one of the nineteenth century’s most notorious men. Drawing from the original newspaper accounts, as well as the memoirs of men who knew him, this is the true tale of gang wars and bloody riots in the notorious Five Points slum, a high-seas mutiny near Panama, bare-knuckle brawls in Canada and California, neck-and-neck horse races in Saratoga, million-dollar wagers on Wall Street, and back-room deals in Washington D.C. that encompass the short but daring life of John Morrissey.

Review at tss.ib.tv by Thomas Hauser