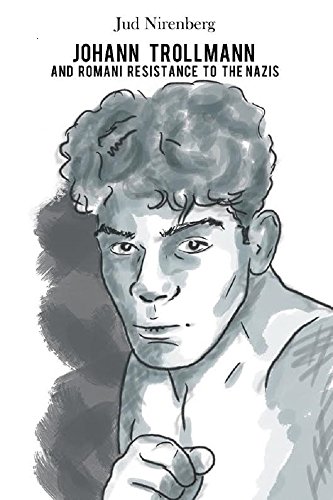 Johann Trollmann and Romani Resistance to the Nazis

In 1933 Johann Trollmann won Germany’s light-heavyweight boxing title. The Nazis would not accept him as the winner because he was Sinto. Many Sinti and Roma (or “Gypsies”) had long been involved in the sport, but Nazi ideology demanded that only Aryans excel as fighters. Trollmann used his visibility in the ring for shocking and aggressive protest, turning boxing into politically charged performance art. He fought for his country, and against its prejudice. Roma and Sinti were victims of fascism, but they also were soldiers, activists, and underground resistors. Since World War II, there has been a struggle to obtain greater recognition of this past. From underground fight nights to Madison Square Garden, from secret partisan meetings to concentration camp uprisings, across several continents, this is a hard-hitting look at forgotten history.

Johann Trollmann and Romani Resistance to the Nazis by Jud Nirenberg (Iowa City: KO Publications, 2016) is an important book for several reasons. First, it is the heroic and tragic story of the Romani (Gypsy) German boxing champion Rukili “Johann” Trollmann, who rose to world fame but was ultimately persecuted with his family and died at the hands of the Nazis in a camp in 1944. Second, it is a gripping account of the Gypsy persecution during the Holocaust. Lacking an influential and well placed diaspora and important institutional support, the Gypsy story has been ignored or consigned to footnotes heretofore. Only now is the tragedy finally emerging after some sixty years of neglect. Nirenberg’s book will take its place as a major contribution to this belated awakening. Third, the book reaches back long before Trollmann to sketch the history of the Gypsy migration into Europe and the centuries of persecution of this the largest unsettled minority in Europe. As Nirenberg forcefully points out even today the European Gypsies have an uncertain existence, still discriminated against, humiliated and misunderstood. Only fitfully have Europeans now come to recognize their debts to the past and their responsibilities for the future. Nirenberg has gripping, fluent style and his book is strongly recommended.

Johann Trollmann’s story is one that opens up long-overlooked histories of resistance and protest against Nazi rule. It take us the hidden history of Roma and Sinti resistance to Hitler, but also of the links between that resistance to longer struggles for recognition for Roma and Sinti as citizens, as artists and sports figures, as intellectuals and activists, as everyday people, and as part of larger histories of Europe.

An article by the author Jud Nirenberg, They Are Europe’s Largest Minority – And also Its Most Despised at the History News Network.

An essay by David Blake Knox entitled Gypsy Dancer at the Dublin Review of Books.