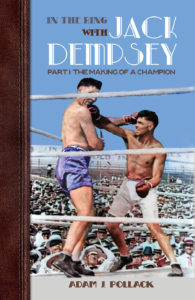 In the Ring With Jack Dempsey – Part I: The Making of a Champion

In the Ring With Jack Dempsey – Part I: The Making of a Champion is the most thorough and detailed book ever written about former world heavyweight champion Jack Dempsey. This book (the first of two) chronicles Dempsey’s life and career from its start up to his winning the world heavyweight championship, fight by fight, as told by those who saw the contests and reported on them at the time, utilizing multiple local next-day newspaper reports. This includes training, predictions, pre-fight hype, and discussions about the opponents.

As with other books in the In the Ring series, this book also discusses the context of the times, the color line and race in boxing and society (offering the perspectives of both white and black-owned newspapers), World War I, Dempsey’s personal and managerial choices, and how these topics affected the sport and Dempsey’s life and career. Even new facts about the controversial Jim Flynn fight are revealed. Boxing fans will obtain knowledge and insight into Jack Dempsey’s life and career like never before.

560 pages, with over 550 rare photos, illustrations, cartoons, and fight advertisements.

Listen to the interview with Adam J. Pollack conducted by Ismael Abdusalaam for BeatsBoxingMayhem.com

Mr. Pollack’s In The Ring series are the definitive boxing reference books in existence on their subjects. In this book on Jack Dempsey Mr. Pollack may well have surpassed even his comprehensive previous volumes which are known for tremendous fact finding. Previously, large parts of Dempsey’s pre championship bouts were thought to have been lost to history. This now is no longer the case! Nearly every bout of Dempsey’s career has been unearthed by Mr. Pollack bringing a wealth of new found information and appreciation of the incredible Jack Dempsey. Go on a wild ride with the Colorado mountain lion culminating in a climatic showdown with the tough hewn cowboy giant made of rawhide, champion Jess Willard. You will not be disappointed, at all.

Adam is an amazing author. His expertise in the boxing realm is unsurpassed. The prose brings to life each combatant and elucidates what made them great. I look forward to each volume in this fantastic series.

An Instant Classic: Pollack does it again.

Adam Pollack continues his unique, ground-breaking body of work on the sport of boxing with this outstanding first volume (1 of 2) on ring immortal Jack Dempsey. Pollack provides never-before-compiled, exceptional archival information on the rise of The Manassa Mauler. The book is filed with detailed golden nuggets about the man and his early rise from obscurity through his title-winning bout with Willard. The book is a must for fight fans, Dempsey fans, and sports fans. Cannot wait for Vol. 2.