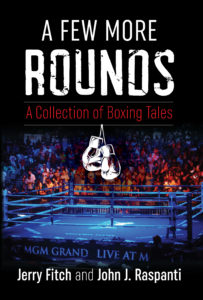 A Few More Rounds: A Collection of Boxing Tales

A Few More Rounds: A Collection of Boxing Tales examines the sights, sounds, and assorted types that populate the fistic landscape.

The 20 chapters include unique stories from Fitch, who writes lovingly of his lifetime friendships with legendary fighters of the past, and Raspanti, whose prose includes instances of racism, hate, retribution, and loyalty.

A delightful and entertaining love letter to the sport of boxing

The writing duo of Jerry Fitch and John J. Raspanti has combined to produce a book that can be compared to a beautifully executed one-two punch. Their latest gift to boxing fans is a delightful and entertaining love letter to the sport of boxing.

While each contributes 10 of the twenty chapters, both write from a very personal perspective. Over the years they have not only corresponded with some of the greatest boxers who ever lived, but have also developed lifelong friendships with many of them. The boxing careers of Tony Zale, Archie Moore, Jimmy McLarnin, Jimmy Bivins, Lloyd Marshall and Jersey Joe Walcott are well documented, but what both Jerry and John bring to the table are personal moments shared with these and other lesser known contenders and champions. The result is a revealing look at the family relationships, personalities and behavior of men who have chosen to compete in the toughest of all professional sports.

The book has a conversational feel to it, like having a beer with two very knowledgeable boxing historians who keep coming up with fascinating topics, and you’re having so much fun you just don’t want it to end. Chapters like “My Favorite Fighters”, “Forgotten Middleweight Contenders From The 1950s”, “Five Must See Boxing Movies” and “Memories Of The Olympic Auditorium” are among the potpourri of interesting topics that will leave you wanting more.

I have read many boxing-oriented books over the years, some good and some bad. I have no problem recommending A FEW MORE ROUNDS because each chapter has stories that you have never heard before. Both of the authors are knowledgeable and write in an entertaining, yet informative manner.

One of the best books I have read

I have to say it was awesome and filled with some amazing stories and pictures!! A brilliant read, worth buying! Great read for boxing fans.

In A Few More Rounds, veteran fight beat writers, Jerry Fitch and John J. Raspanti deliver a walloping double whammy of old school insight into this twenty rounder of knockout boxing stories. Read about the ring greats of yesteryear, those sadly forgotten and those who never will be forgotten. Visit some places long gone (Southern California’s legendary Olympic Auditorium) but forever alive in memory. Remember the great movies that defined the public’s perception of what the fight game was all about, regardless of the fictionalization offered by Hollywood’s creative screen writers. There’s good times, happy times, sad times, and even some unlucky times but Fitch & Raspanti put it all together with admiration and respect for the fighters, who left behind pieces of themselves in so many the prize rings, not only for our entertainment but for themselves, while daring for greatness in an unforgiving sport. Enjoy the “rounds.”

Both Jerry Fitch and John Raspanti have been writing on boxing for years and have excellent books of their own. Joining forces, they do not disappoint in “A few more rounds.” Jerry’s stories are generally covering further back in time whereas John’s are closer to the more recent fight scene which blends perfectly. As is often the case in boxing literature, the stories behind the fighters, the fights, the events etc; are just as thrilling as what goes on in the ring. Both Jerry and John tell their own personal experiences and tie it to their stories in a wonderful manner which makes for a wonderful read. I highly recommend this book to all boxing fans!! Great job guys!!

A never ending true saga of life in boxing!

During the mid-60’s, I was consumed by boxing both literally and figuratively. My uncle, Tony Zale, was a two time World Middleweight Boxing Champion in the 1940’s. As a youth, I found myself defending the family name wherever I went. It seemed as soon as someone recognized me as a Zale in Gary, Indiana, I was in a fight. It became so bad my senior year in high school that my assistant principal penned a letter to my mother stating that if I was in another fight, whether or not I started it, I would be kicked out of my Catholic high school and therefore, unable to graduate. Thus, began my growth and interest in pugilism.

My uncle, Tony Zale, was an inspiration to all he met before, during and long after his ring days. For him to be included in the book ” A Few More Rounds ” is an honor he would have truly enjoyed. To be remembered for his accomplishments is what he aspired to do during his 83 years of life. I compliment co-authors Jerry Fitch and John J. Raspanti for this journey around and through the history of the squared circle. It is a magnificent portrayal and melding of styles by two men who know who and what they are talking about. Jerry and John have given their readers an opportunity to see and feel what it is like to be committed to the trade. You meet and greet many a fighter and you begin to understand what it takes to be a champion from the west coast to the east coast and everywhere in between.

Within each chapter, the reader gets a glimpse of the personalities, life styles, heart and determination of the men who strap on leather gloves for a living. It is interesting to read about fighters who come into this sport almost universally down the same path and from the very similar backgrounds. They are looking for a chance in life and they’ve found it in the sweet science. Some say it is a brutal sport and that is true, but if you’re not thinking and figuring out your opponent in the ring offensively and defensively, you are in big trouble. These authors lay it out for you chapter by chapter. They show you some men that make it to the top and others who experience the ” agony of defeat “. A boxer’s life story needs to be told and Jerry and John share with us so many of them in ” the way it was “. They share with us their favorites with style and expression. For me, this makes it one of the best books I have read since a few years back (2014) when I formulated my uncle’s story with boxing historian and co-author, Clay Moyle.

Thank you gentlemen sincerely for putting your skills into practice by writing ” A Few More Rounds “. It could not have been written any better and I give it a two huge thumbs up.

My dudes Fitch and Raspanti wax poetic with their experiences with Boxing and with the actual fighters. A truly fun read that makes one smile throughout. If you are a Boxing fan, young or old you will learn a few things and have a fun ride in the process. Well done guys. This will be one I read more than once.

Amazing read!
This delightful book brings together a diverse collection of boxing tales from established authors John Raspanti and Jerry Fitch. These uniquely personal stories cover a combined 100 years plus of following the sport.
Raspanti pens a particularly poignant tale about racism in Oklahoma after Cassius Clay changed his name to Muhammad Ali, a story that doubles as a tribute to his dad. He compliments his early memories of the sport with contemporary yarns about Andre Ward, Virgil Hunter, Karim Mayfield and wild nights watching the fights live in Los Angeles.
Fitch digs into his own rich history to give firsthand accounts of his friendship with Tony Zale, Jimmy Bivins and other such luminaries, explaining in detail the best fighters of his era and why they deserve the utmost respect.
The writing itself is both free-flowing and compelling, placing the reading in the passenger seat and taking them along for the ride.
A welcome addition to the library of any sports fan.
– Anthony Cocks